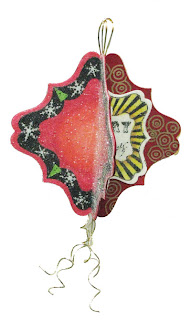 I created these ornaments with Spellbinders Labels Sixteen and our coordinating digital images (which come free with the purchace of the Labels Sixteen die set).  I simply printed the PDF on Cryogen Curious Metallics Cardstock and colored 2 of the large frames and two of the framed verses using Marvy Alcohol Markers.  In a step coming up, I will cover these dies with clear glass Micro Marbles and I find the easiest way to do that is to apply double-sided industrial strength red liner tape before die cutting the images so I can cut the tape and paper at the same time. 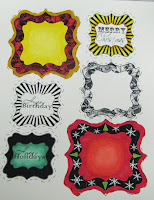 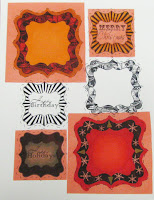 Red liner tape tends to gum up punches but it works great with dies, with no sticky mess at all.  The red liner tape and marbles are optional.  You'll see in a second similar ornament where I added marbles only to the edges after the ornament was fully constructed.  Whether you're die cutting just the cardstock alone or with red liner tape, you'll want to secure the die to the image with a removable tape.  I use Post-It tape because it peels off the cardstock easily without tearing it or leaving any residue.  It doesn't adhere strongly to the red plastic liner on the tape so if you get frustrated, try a stronger tape.  Strangely, the dies cut through the tape and the cardstock but don't cut through the liner.  This is part of the reason it's such a clean process.  Simply peel the image and tape away from the liner.  The frame of the cardstock will stay adhered to the liner so you can throw that all away unless you cut the tape and cardstock cleanly enough that you can use it for another project. 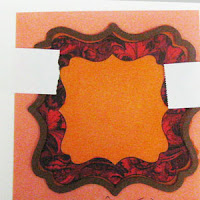 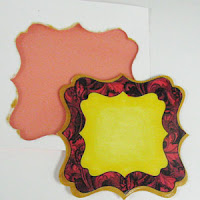 Your tape covering the image is exposed at this point so go ahead and apply your Micro Marbles using a tidy tray or box lid before the tape gets stuck to something.  I started with a few of the 1mm marbles, then covered the rest of the tape with .5mm marbles and then filled in all the gaps by adding a final layer of Micro Marble sand.  I poured off the excess marbles with each step back into their containers so I didn't contaminate my sizes. 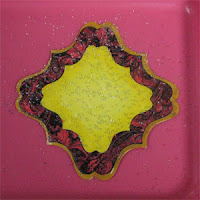 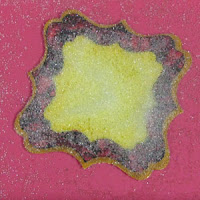 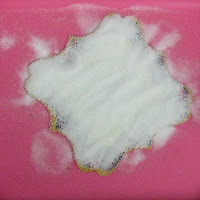 Do these same steps for any of the layers you plan to cover with marbles.  I did two large panels and two small panels.  The ornament requires 4 large panels so I cut two plain red large shapes and centered the smaller framed verses onto the red panels and drew some doodles using a gold metallic paint pen on the exposed red panel.  You'll want to fold all 4 large panels diagonally in half as shown.  The panels covered with marbles fold easily.  I used 1/8" red liner tape around the back edges of each panel to secure all four into a star shape.  I've used ATG tape for this in the past and found the panels pulled apart over time.  Before securing the final two panels I folded a single strand of 14K Gold Mizuhiki cord in half and then in half again using the double loop end as the hanger for the ornament hook.  I used a small 1/8" piece of red liner tape to wrap the top of the strands so the loop doesn't slip and snipped the single loop at the bottom to make a sort of tassel.  After securing the final panels of the ornament I twisted the bottom of the Mizuhiki tassel strands around a skewer to shape them. 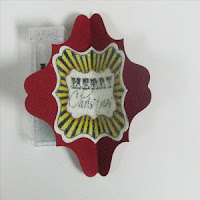 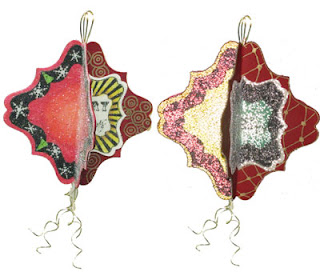 The above left photo was taken in noraml light with no flash and the photo on the right was taken in low light with a flash to demonstrate how the clear marbles can really sparkle in the tree lights at night.
Below is an example that also uses our digital file but also uses stamped images from our Illustrated Christmas and Figgy Pudding Christmas stamp sets.   I didn't add any redliner tape or marbles to the surfaces of the panels so the ornament has less weight than the ornament above.  I added 1/8" red liner tape folded over the edges of the panels and covered them with 1/2mm Clear Micro Marbles.  The marbles made a big difference in the look and feel of the ornament, and kept it from feeling like a paper disposable ornament. 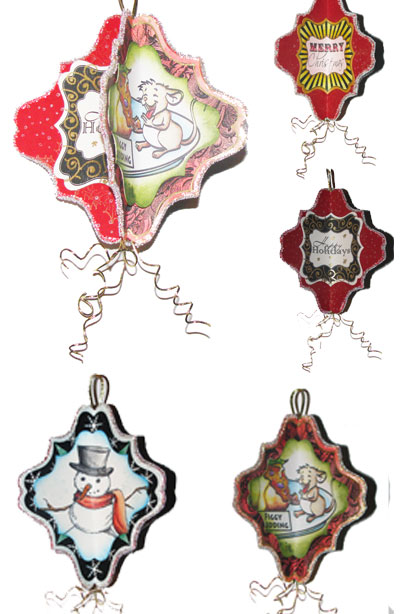